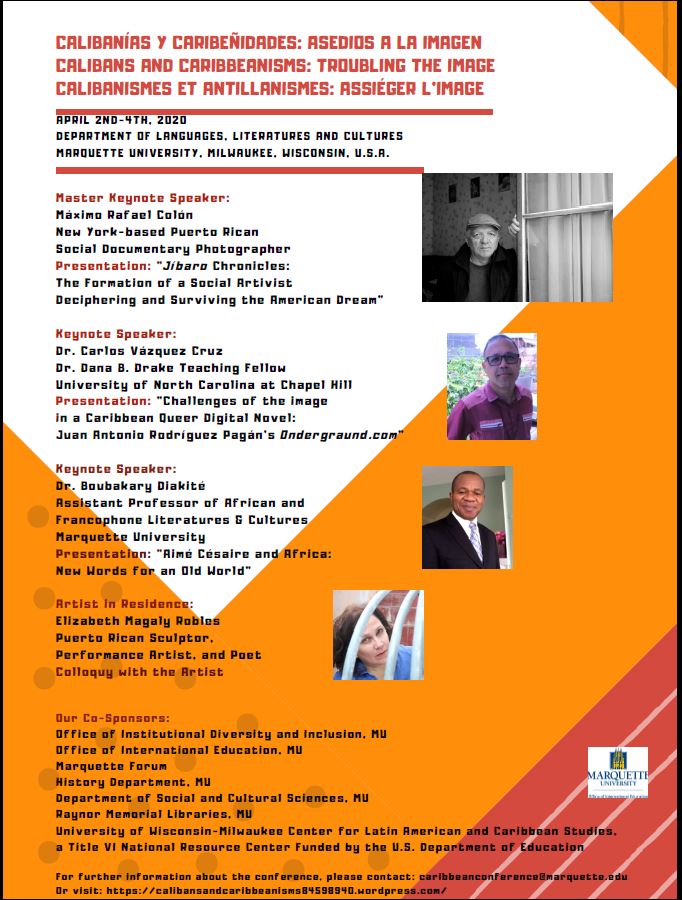 The second Calibans and Caribbeanisms conference interrogates the images that have traditionally served to construct the Caribbean. A violent image such as that of cannibalism is encrypted in the name itself of this region of the world as a contact zone named by the fears and the greed of the colonizer. Roberto Fernández de Retamar resemanticizes the figure of the rebellious Calibán as an ambivalent representation of both the colonial wound and the possibility of freedom from oppressive tropes. In that spirit, this interdisciplinary conference is guided by questions such as the following: How has the tension between representations of Ariel, as José Enrique Rodó’s figuration of the Latin American organic intellectual, and Calibán –a figure of dangerous excess, marginalization and revolutionary potential– dominated discussions and discourses of Caribbean identity? How is the Caribbean itself as a geographical location conceptualized as an image of “excess”? What are the ethnoracial discourses constructed around this very image of “excess” that contribute to the imperial configuration of the Caribbean as a “paradise lost,” found now by cryptocurrency billionaires and millionaires, investors and tourists in search of the solace of “tropical resorts”? How have discourses on capitalism and globalization configured the Caribbean as a coveted “prize” in what Naomi Klein has termed “the battle for paradise”? How has Caribbean-heavy reliance on the industry of tourism contributed to the notion of the Caribbean as “commodity,” as evidenced by an industry that puts islands and keys up for sale? How have recent hurricanes like Matthew (2016) and Maria (2018) unveiled the issues of structural inequality that the Caribbean has been dealing with since colonial times? And in the midst of the chaos left behind by natural disasters like these, what individual initiatives (artistic, entrepreneurial, agricultural, etc.) put forth an image of futurity and hope that counters the dominant disastrous narrative? How have 20th and 21st century diasporas further led to questions of how to envision Caribbeanness beyond geographical boundaries? And last but not least, how has the language of images offered decolonial alternatives to more logocentric understandings of the Caribbean and Caribbeanness? How do any of these factors surface visually? What tensions between images and words are involved in those representations? Our goal is to bring together papers that address any number of these topics as they manifest themselves in the humanities, the plastic arts, and the social and political sciences. Our trilingual conference [French, Spanish, and English] invites papers that reflect on the sorts of issues that follow as they relate to notions of the image:

We invite proposals for individual papers or panels in Spanish, English, or French. Graduate student submissions are encouraged. Panels will be composed of a maximum of 3 presenters. Presentations should be fifteen to seventeen (15-17) minutes long. Please send an abstract of 250 words or less by electronic attachment (in Microsoft Word) to: caribbeanconference@marquette.edu by November 1st, 2019.

Browse the contents of Troubling the Image: