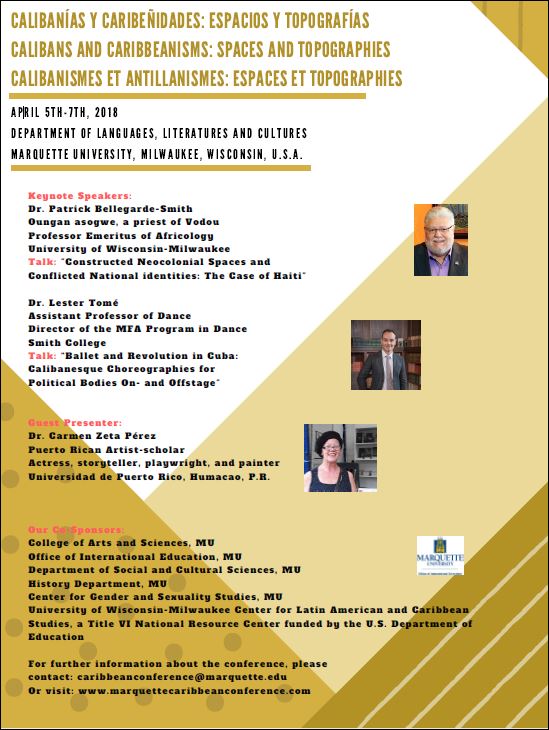 The first conference on Caribbean studies Calibans and Caribbeanisms: Spaces and Topographies was held from April 5th to 7th, 2018 at the Department of Languages, Literatures and Cultures at Marquette University, Milwaukee, Wisconsin. Playing with the metaphor of the rebellious Caliban as protagonist, this interdisciplinary conference was guided by the following questions: How has the Caribbean been constructed historically as a geographic place and an imagined space both from within and without? How did the colonial encounter shape the notion of Caribbeans as “subhuman Calibans” or “cannibals,” and how has the coexistent resistance to such othering continued to revise colonial and neocolonial misperceptions? How have 20th and 21st century diasporas further led to questions of not only how to locate Caribbeanness, but challenged the notion of real and imagined boundaries of space, nation, and identity? And given 21st century political changes that have opened the Caribbean increasingly to global markets, how have the continued intertwinements between language, power, and mobility led to inventive artistic and literary production? The conference explored with particular interest notions of “space” and “topography” as matrices where a variety of understandings about Caribbean cultural identity are negotiated. We also had keynote addresses given respectively by Dr. Lester Tomé about Cuban ballet and revolution, and Dr. Patrick Bellegarde-Smith about spaces for the construction of Haitian identity, such as the voodoo religion. Calibans and Caribbeanisms will be a biennial event. Our next conference will be held at the Department of Languages, Literatures and Cultures at Marquette University on April of 2020.

Browse the contents of Spaces and Topographies: