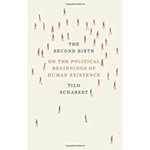 Most scholars link the origin of politics to the formation of human societies, but in this innovative work, Tilo Schabert takes it even further back: to our very births. Drawing on mythical, philosophical, religious, and political thought from around the globe—including America, Europe, the Middle East, and China—The Second Birth proposes a transhistorical and transcultural theory of politics rooted in political cosmology. With impressive erudition, Schabert explores the physical fundamentals of political life, unveiling a profound new insight: our bodies actually teach us politics. Schabert traces different figurations of power inherent to our singular existence, things such as numbers, time, thought, and desire, showing how they render our lives political ones—and, thus, how politics exists in us individually, long before it plays a role in the establishment of societies and institutions. Through these figurations of power, Schabert argues, we learn how to institute our own government within the political forces that already surround us—to create our own world within the one into which we have been born. In a stunning vision of human agency, this book ultimately sketches a political cosmos in which we are all builders, in which we can be at once political and free.

Buy this Submission
Find in your library